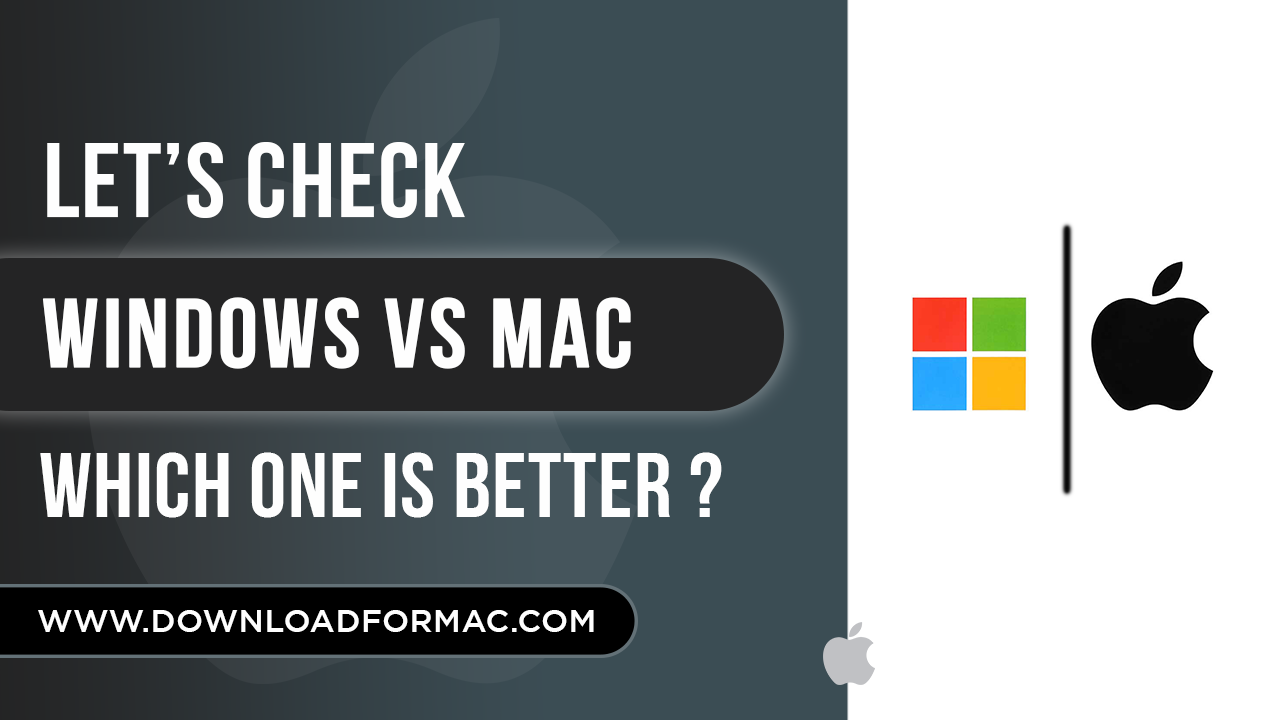 When it comes to comparing Mac and Windows, It is exciting to know more about their differences. So, let’s explore Windows VS Mac Which One Is Better and I am sure you won’t get regret it after reading this article.

See, to be honest, Mac has a different workspace than Windows. This operating system is designed to work faster. That’s why Mac has inbuilt graphics that provides speed.

The Mac Os can not be installed on some other PCs like WIndows. Mac Os is having something next-level look and feels that windows do not.

If you are using Mac, you can install Windows software in it, but in Windows, you can not install Mac software. This becomes possible with the help technology provided in Mac OS, which converts Windows Apps into Mac.

And designing has no comparison. It comes with an awesome User Interface which Windows does not have. However, in Windows 11, Microsoft Developers tried to compete with the Apple Mac.

Apple is a Minority in terms of Users. The products are costly, which everyone can not afford. It has no dought Mac is secured than the windows. Mac has control over its Operating System. This OS can not be installed other than the Apple hardware. There is only one manufacturer of mac hardware.

However, In 2020, a report was published by Malwarebytes in which it is said that windows are much secure than Mac. The security threats for Mac in 2019 were nearly doubled Than Windows.

If you are looking to keep your data safe, you should go with Windows, which now comes with internal security Windows Defender that avoids malware automatically.

The processing speed of the Mac is Faster Than the Windows because the technology Mac uses windows does not. However, it is now adapting by the windows also.

Mac is using SSD, which stands for Solid State Drive that is 10 times faster than the HDD. This is the main reason why mac is faster than windows.

Windows comes with Hard Disk, which is slower than SSD. However, windows are now started integrating SSD into its hardware which may create competition between both Companies.

The design and build quality of the Mac is strongly better than windows. Apple is a company that is focused on designing. Even steve jobs very famous quote is-

And that you can feel once you open the Mac, you can see the difference between them. Mac uses animations on different actions, which makes it completely different from Windows, whereas Windows does not use many animations.

When it comes to hardware configuration, Apple laptops come with metal bodies. While windows laptop rarely comes with a metal body and can not compete with Mac.

Price is the biggest factor for customers to buy either Mac Or Windows.No dought windows are cheaper than Mac. Several companies are selling laptops based on Windows OS.

The price of the PCs depends on the Brand value of the company. For example, if you buy the same product of HP and Dell, you will see the price difference between them.

Also, Read- What Is New In Latest Windows 11

In Mac, there is only one company that is Apple.Inc who are selling Mac so there is no variety in the price of the laptop.

Another reason for being costly for Mac is Technology. The mac-based laptop comes with SSD configuration and a high inbuilt graphics Card that makes it perfect, while a Windows laptop usually comes with Hard Drive that is cheaper and slower Than Mac.

Personally, I would say you should go with Windows because there are fewer bound, cheaper than Mac. You can purchase the same configuration at less price in windows because windows also come with SSD, making WIndows a competitor of Mac.

But if you prefer Brands no dought Apple is the biggest brand in this industry, and this is attractive also with a compact design. Another factor is battery backup that windows can never compete with Mac.

This was all about Windows VS Mac. Which One Is Better? I hope this information will be helpful for you to purchase either Windows or Mac.